» Take a Delhi City Tour to experience the old world charms and contemporary vibes existing amicably at every corner. Soak in the secrets of enchanting Old Delhi with its splendid monuments and buildings. From the wonderful Red Fort to majestic Jama Mosque, from venerable Gandhi memorial to imposing India Gate, from regal parliament to exquisite president’s palace – the Delhi City Tour enriches in a profound way.

Pay a visit to the Humayun’s Tomb to see how the forerunner of the Taj Mahal delighted for years. The pomp and brilliance of Mughal architecture is on display at the site of Red Fort. Don’t forget the stunning Jama Masjid, which is the India’s largest mosque. Go to the Raj Ghat to visit the memorial to Mahatma Gandhi, and feel a sense of calm.

The Delhi City Tour has a lot to offer, the charm of the arched India Gate is second to none. Other notable structures include the parliament building, Rashtrapati Bhawan, Qutab Minar and Humayun’s Tomb. Delhi City Tour is a fine amalgamation of art, history and culture, so don’t miss the chance to explore the real essence of the capital city of India.

The standard time to start the tour is 09:00 AM. However, you can select your own time. At 09:00 AM, IBCD Team member pick up from your desired location in Delhi / NCR and proceed for full day tour of Delhi.

1. Akshardham Temple (Monday Closed) This is a relatively modern temple build in 2005 by Pramukh Swami Maharaj. The temple, at the centre of the complex, was built according to the Vastu Shastra and Pancharatra Shastra.

2. Jama Masjid This is a 17 century Mughal Marvels at Delhi and this is a largest mosque in India.

3. Red Fort (Monday Closed) This is a 17 century fortress built during the ShahJahan's reign and this majestic building is made of Red Sand Stone.

4. Raj Ghat This is a Ceremation site of Mahatma Gandhi father-of-nation.

5. Laxmi Narayan Temple (Birla Mandir) This is a relatively modern temple build in 1938 by Baldeo Das Birla and his son Jugal Kishore Birla of Birla Family. Birla's built many temples in many cities of India but this is the first of a series of temples built by them, which are also often called Birla Mandir.

6. India Gate This 42 meter high arch was designed by Edwin Lutyens in memory of Indian Soldiers who sacrificed their lives during 1st World War. This is situated on Rajpath, in the centre of Delhi.

9. Lunch Break 45 minutes to 1 hour Lunch break in a One of the famous restaurant for the foreigners and locals for tasty food.

10. Humayun's Tomb This is the mausoleum of 2nd Mughal Emperor Humayun. It was the first garden tomb on the Indian Sub-Continent.

11. Qutub Minar This 72.5 m high minar is a symbol of Delhi Sultanate. Built during the reign of Sultan Qutub-ud-din-Aibak in 1199 AD.

12. Lotus Temple (Monday Closed) Lotus Temple is one of the most incredible architectures of Bahai's faith. The temple has been constructed to resemble a lotus flower.

♦ Special ℵote → The above itinerary is a suggested one. We can do customization in Delhi Day Tour ( 0 Nights & 1 Days ) package to make an itinerary as per your comfort, special interest and requirement which can be adding new places to visit or changing the sequence of whole package. 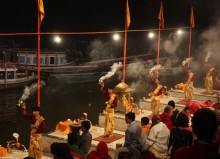 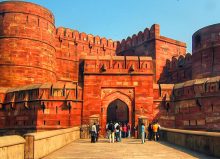